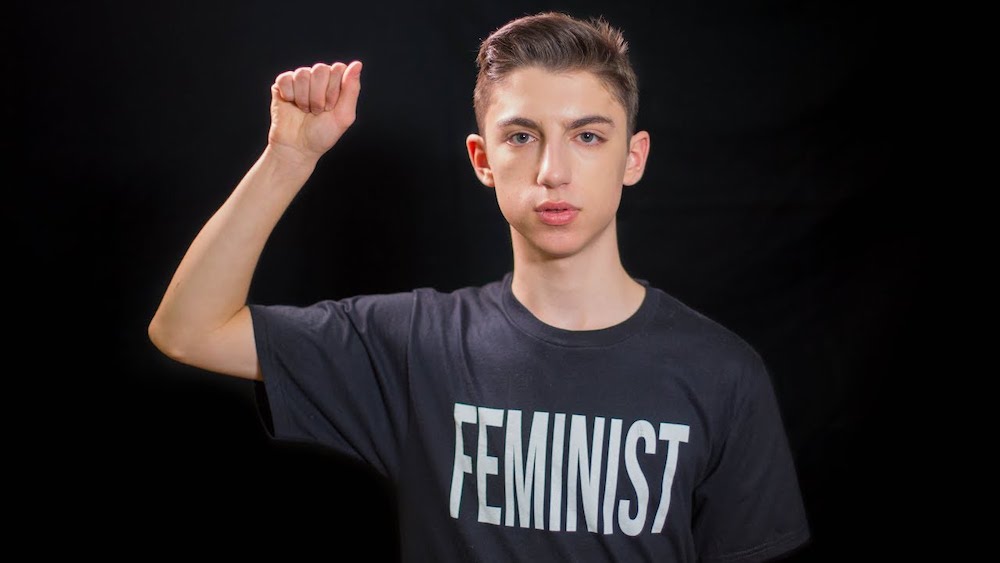 My name is Eitan Bernath. I am a 16 years old male and I am a proud feminist.

Feminist – an advocate of women’s rights on the basis of social, economic, and political equality of the sexes.

Today, is International Women’s Day, a day of advocacy for women’s rights around the globe. I am here to talk to every teenage boy that is watching to explain to you why it is important for us teenage guys to be feminists and what that really means. We must be an ally because gender equality is not a woman’s problem but a HUMAN problem.

Personally, I have always been a feminist ever since I can remember because I was brought up strong working women like my mom and grandmothers. Additionally, many of my biggest inspirations have been women who are outspoken feminists like Ellen Degeneres and Lilly Singh. I am definitely no expert on the topic but always am trying to educate myself on it to understand what I am passionate about on a deeper and more informed level.

Here in the United States, it is almost the 100th anniversary of the 19th amendment that enabled women to vote and have a voice in the government. A century later, we have made tremendous strides for gender equality in this country and there are more women today in Congress than ever before.

While we have come a far way here in the United States, in many parts of the world, women are still treated as property and have few to no rights of their own. Education isn’t even an option in many places because women are seen as uneducable and only capable of working in the home. There is so much work to be done to not only educate more women but to build societies that support more women in the workforce.

Furthermore, in many countries, women are removed from society and made to live in isolation during menstruation because of beliefs that a natural bodily function is somehow unholy. How can something that is a natural biological process which can’t be controlled be evil or wrong? We must combat all misogyny whether it is blatant or hidden under the guise of tradition.

We need to throw away ridiculous taboos and include in the education system for teenage guys like me an education about many things like consent, that no means no, and that no item of clothing or lack thereof means “she was asking for it”.

It is no coincidence that boys grow up – whether consciously or subconsciously- thinking they are superior to their female counterparts. Misogyny is ingrained in many aspects of how we raise our kids. We must teach boys from a young age, women are not princesses locked up in a castle waiting for a strong man to save her. Teach them that women are strong, powerful, and, like them, capable of shaping their own future.

For all teenage boys watching this, I am asking you to stop and think about what it means to be a feminist and why you should also identify as one too. I promise your masculinity will not be threatened by being an advocate for women’s rights. It’s a common misconception that when women are lifted up it means men are brought down. That couldn’t be further from the truth.

When we are all united we can and will fix the broken system that is in place. Ensuring equal rights, pay, and opportunity for every woman in the world is not a radical idea, political agenda, or impossible. Imagine what can be accomplished when half of the world’s population isn’t held back. Not only will this have a major socioeconomic impact but there will be tremendous breakthroughs in every field of work that ultimately will advance humankind.

Ever since I have been loud and proud about my support for gender equality, I have encountered many boys my age who’ve jeered at me when hearing that I am a feminist. It’s unfortunate that the false negative connotation of the word caused their fragile masculinity to feel threatened. I try to educate them on the true meaning of feminism and hope I have done the same with this video.

So let’s just make it clear that there is nothing manly about being misogynistic. Every teenage boy should be a feminist to ensure that their mother, sister, or future daughter has every opportunity in this world to succeed as they do.

My name is Eitan Bernath and THIS is what a feminist looks like.

Eating at the Iconic Levain Bakery