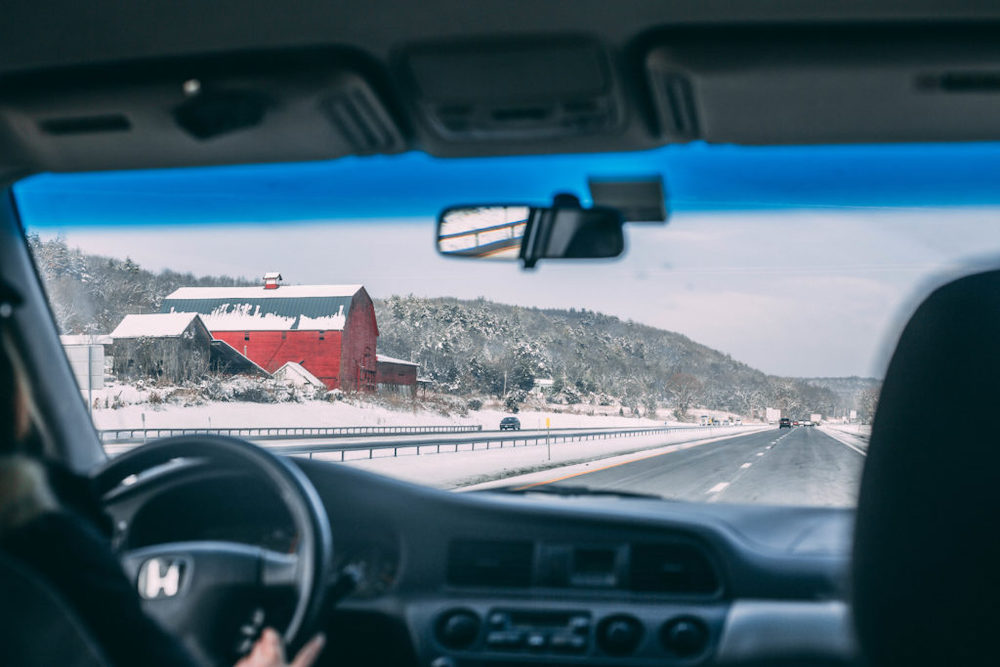 Last weekend my family and I were invited to stay at our friends’ vacation house up in Manchester, Vermont. Their property is primarily 40 acres of woods with the house sitting on top of 4 acres of open fields.  It is an extremely remote and private property….you can’t even see a neighboring house through the trees.

Manchester, which is nestled in the heart of the Green Mountains in Vermont, is a former iron-mining town, but today is the quintessential Vermont getaway. It’s a true all-season destination, with iconic skiing slopes in the winter, breathtaking views of the surrounding mountains in the spring and summer, and miles and miles of beautiful foliage in the fall. No matter what your vantage point, the views are always spectacular.

Over the three and a half hour drive up to Manchester, the department stores on the side of the highway slowly turned into forests, fields, and old barns. While driving up in the car we got an exciting call from the friends that the weather that weekend was going to be perfect for harvesting maple syrup.  To have the trees release their watery sap it must be freezing at night and then above 40 degrees during the day. I was instantly filled with pure excitement knowing I’d be making maple syrup. Ever since we first went to their vacation home last summer and saw their hundreds of tapping tubes and maple syrup making equipment, I have been dying to be there for the production of the prized golden syrup. Finding out we were actually going to be doing some production ourselves was awesome. The trip was already off to a great start!

We arrived at the house which was preached at the top of a huge hill laced with snow. We unpacked our car, threw on warm clothes, then headed out to the hill. We started sledding down that huge hill. Seriously the best hill for sledding ever. To avoid the treacherous climb back up the hill,  someone in our group would drive the snowmobile down the mountain to pick us all up.  The snowmobile had a large sled attached to the back so we literally sled down and then up the hill each time.  Up down, up down…we rode on tubes, sleds, and even a huge toboggan. It was seriously a blast!

Eventually, it was my turn to take a spin on the snowmobile. Flying down the mountain, the fresh wind hitting my face, it was seriously amazing. After that, we got out the taps and buckets to collect the sap from the trees. The owner of the house showed me how it was done.  We drilled holes into the trees, put in the tapping spout, then finally placed the collection buckets underneath to catch the sap. We were short on time because it was getting dark so we only ended up tapped a few trees. Once it got dark, we all went inside for dinner. The rest of the night consisted of playing board games, ping pong, and lots of fun schmoozing. I was totally exhausted after dinner, but it was a fun day of traveling and playing in the snow.

Saturday was super relaxing and fun.  We all stayed on the property playing in the snow or relaxing in one of the comfy rooms in the house. We had a huge delicious lunch which you know is an important part of any vacation for me!  While most of the food was potluck, for lunch the bulk of the food was brought by a family that just visited relatives from Montreal.  They brought freshly baked breads, a variety of unique cold cuts, and prepared meats that I had never even seen before.  Montreal is now definitely on my list of foodie spots to check out one day.

For instance, we had a rolled meat dish where the outer layer was a pounded chicken breast, then a layer of salami, then a final inner layer of a seasoned ground beef.  It might not have been the most attractive dish, but the flavors of the many layers worked so well together.  It was simply delicious and I had no less than three helpings.  Because it was Saturday, I had to put down my camera and just enjoy the beautiful nature around me with my own eyes. I think my favorite part of the day was when I took a walk with my brother down to a gorgeous freshwater spring near the house. The water is so pure that a water company even approached the prior owner about paying to bottle the water. I didn’t take a drink this time, but I have in the past and it is the most refreshing beverage ever!

At night, we had some fun family time ice skating at a local rink then went back to the house for a pizza making party.  I had a blast cooking everyone’s personal pizza in my friend’s outdoor pizza oven.  There is nothing like cooking pizza with fresh wood in the freezing cold mountains of Vermont.  Truly an authentic foodie moment.  I was in heaven. Everyone’s pizzas were delicious, but my favorite pizza was my own actually.  I made a goat cheese, garlic, mushroom personal pizza that had a perfectly charred crust, chunks of gooey melted goat cheese, chewy mushrooms all infused with a smoky flavor from the burning wood. Really it was pizza heaven!

The next day started with a trip to “town” to go shopping. We all rode in the big red van and split up to explore the area. Once we arrived, I headed straight to my favorite local antique shop, “Green Peak Elements”. It’s full of tons of beautiful antiques with very affordable prices. I walked around checking out all their unique pieces. While walking around, I snapped a beautiful picture of the store (see below) and picked up two small wooden crates for my food photography. I love to collect new props on all my travels, so I was stoked to find two new interesting props.

We headed back home for some more sledding and snowmobiling on the hill. They even brought out the Tomcar, basically an awesome off-roading car, and it was so much fun sitting in the car while my dad did donuts around the driveway. It was incredibly exhilarating, like an amusement park ride! I pulled out my camera and snapped some awesome pictures of the car spitting up snow in the air, then handed my camera to my friend, Ben, to snap some cool pictures of me in the car. It was so much fun!

Finally, it was the time I had been waiting for! The trees had been dripping their prized sap into the buckets, all weekend long, and now they were full. We gathered all the sap and had a small batch to boil into syrup. Typically, they have hundreds of trees tapped, but today we were doing just a small batch. Next, we chopped some firewood and made a roaring fire in the huge maple syrup evaporator.

After a few hours, it had boiled down enough to be transferred to a small pot where we finished boiling it down inside. Before I knew it the clear sap had turned into a golden syrup. Our small batch of sap boiled down to about a cup of maple syrup. It’s crazy when you think of how much time and energy is spent to make that bottle of maple syrup sitting in your pantry. Then we divided it up into a bunch of small bottles and each family got to take one home.

The next morning we said goodbye and headed back home to New Jersey. It was an unforgettable trip full of fun time in the snow, some cool automobiles, antique shopping, mouthwatering pizza, and even maple syrup making. While I love working and being connected to my phone at almost all times, it’s definitely nice to sometimes disconnect and enjoy time outside.  There is so much this beautiful earth has to offer. I highly recommend taking a trip to Manchester, Vermont and experiencing it all for yourself! I hope to go up there again soon and maybe even see the maple syrup manufacturing running at its full capacity!

Stay tuned for more travel posts! I have a lot planned for this summer and I want to make sure you all get to follow along! It wouldn’t be the same without you.

How Canteens Are Changing Lives In India

Eating at the Iconic Levain Bakery

Why Every Teenage Boy Should Be A Feminist

Recipes I Cooked For Lilly Singh!